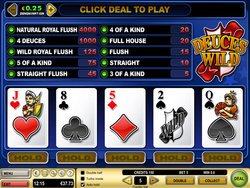 With the fame video poker has garnered throughout the years when it dominated brick and mortar casinos to our contemporary society where it has now become proliferated even on the online world, it is only to be expected that more and more variants and titles of the game would be added in the libraries of various developers. There are many variants but, some are just more pronounced than others, and this includes the Deuces Wild type, which is practically one of the best video poker games today. It is reckoned to be the game variant in this category, which holds one of the best video poker odds as well. With such an enticing description right on its belt, it is not surprising that there's myriad of people out there wanting to dominate floors of this game on establishments as well.

Before you do go to a land-based or online casino, make sure that you are already proficient to the game. It would even be better if your knowledge goes beyond the rules of the game and if you are already knowledgeable about some strategies that you could employ. This way, you can make the most out of this best video poker game and start raking in some serious dough as well. Continue reading and hopefully, you'll find yourself in a more ideal position when you start dealing with the Deuces Wild machines, in both offline and online mode.

There's a reason why Deuces Wild is the title of this game variant. This is due to the fact that all the Deuces in the game would have a Wild value. If you've played your own fair share of video pokers already, then you ought to know that Wild symbols or cards for this matter, means that they can be substituted for other cards that aren't wild. With these wild symbols, creating winning combinations would be a lot easier than you think.

When it comes to how the game is processed or played, the flow is practically no different from other video poker games such as Jacks or Better . The cards that would be used will still be coming from a 52-card standard deck. The following steps may be already what you've guessed - you would have to wait for 5 cards to be dealt with you, and you get to decide whether to keep them or to discard some. If you opt for the latter option and discard some cards from your hand, you get to receive new cards to make up for the cards you've just discarded. This makes up the final hand that will determine whether you'll win a prize or if you have to try your luck again.

Deuces are basically the number two cards in a Deck. These number two cards being wild, mean that you could substitute them for other cards in order to make winning combinations. This reason alone, makes the game an incredibly advantageous variant for players since they have a layer of cards they could use for their advantage. With deuces, you can have more strategical moves and at the same time, you can rest assured that you'll be playing with the best video poker odds possible.

Just like any other video poker games, Deuces Wild also has its own ranks of hands and Royal Flush is still one of them. Bear in mind though, that to get a royal flush, there should not be any wild in your hands. This royal flush would bring you up to 250x your bet. After that, the prize isn't that far off from the former, as the Four Deuces could bring you 200x your bet. The Royal Flush with Wild Cards though, along with the other lower combinations like Five of a Kind, Straight Flush and more, come with relatively low payouts.

Common Strategies You Should Know

When strategies are in the limelight of the discussion, it more often than not, pertains to ways to make decisions when your card has been dealt to you. Would you keep it? Or would you discard some cards? What cards should you discard and keep? This is where the strategies of a player would come into play, and depending on your move, you can meet higher chances of winning or an inevitable failure.

When you gain four deuces, do not forget that they are already the highest you could get at the moment as you simply can't further make that a royal flush since they are all deuce. When you get down to three deuces, you could keep your hand if you believe you could get a royal flush but if not, feel free to discard some for better hand. Practically, what you need to do is stick to cards which you think would have higher chances of becoming completed but if there's none, discard some of your cards away.